Another busy and exciting week here at Milford Haven School, generating lots of good news to share with you all! We also have several dates for your diary detailed below of upcoming events that we hope to see many of you at.

The agenda for this meeting includes home school communications, our whole school homework policy and the period poverty grant.

This will be an opportunity for the parents/carers of years 9 and 10 to come in and get to grips with the new challenges of transition to GCSE for both pupils and parents and what to expect over the next 2/3 years.

This is an opportunity for parents/carers to meet the Directors of Core subjects, Maths and English and get to grips with the challenges both pupils and parents will face over the coming year. Information will be given on November entries. 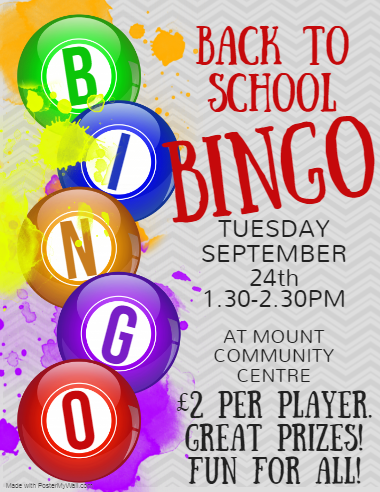 With less than 100 days to go till Christmas, we are excited to let you know that we have set the date for our annual Milford Haven School Christmas Fayre- THURSDAY DECEMBER 5TH!
More details to follow closer to the event, but if you are interested in holding a stall please contact Ms Mansell on 01646 690021 to reserve a spot. The cost is £10 per table, and all tables will be expected to contribute an item to the school Christmas raffle to be drawn on the night.
We look forward to seeing you there and spreading lots of Christmas Cheer!

Please see below a copy of the new and updated Sports Pembrokeshire extra curricular timetable for 2019/20. All sessions are now up and running. 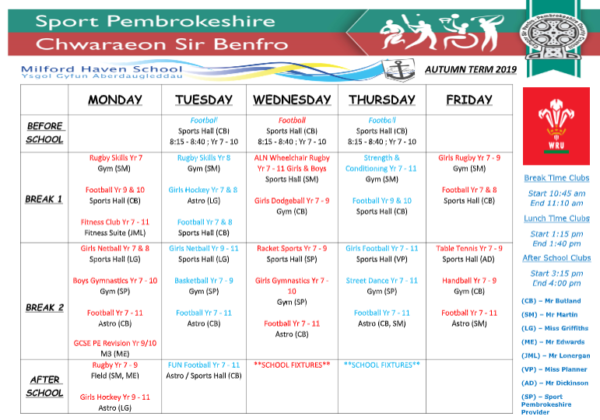 Shwmae bawb! This fortnightly push is to get the pupil’s using the ‘Pawen Lawen’ (pow-en, law-en as in ‘Nadolig Llawen’) in school with friends and family. It’s the Welsh equivalent of a ‘high five’. Why not give it ago? 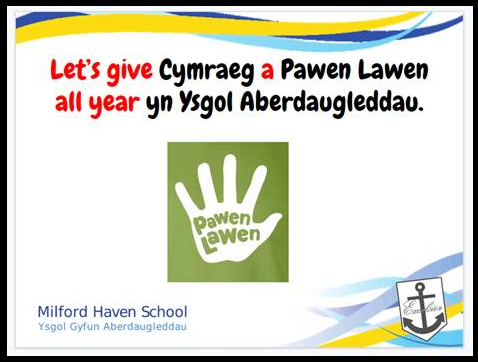 Milford Haven School are excited and proud to announce that the ‘MHS TRAILATHLON’ is returning for a second year on Wednesday October 16th, in partnership with the National Trust. The event will be open to all pupils in Years 7&8, with places being allocated on a first come first served basis. The MHS Trailathlon will start at Stackpole Quay, covering beautiful countryside terrain including Barafundle Bay, with a natural woodland obstacle course enroute offering a muddy challenge. The course will be muddy so we will not be returning clean and tidy children to you at the end of the day! The cost of the day will be £15, which will include transport to and from Stackpole Estate, a marshalled event, plus a goody bag including an event t-shirt for everyone that completes the course. We will be leaving school during lesson 3, and returning to school ready for the end of the day, so pupils are requested to get their lunch at the earlier break time and bring a snack for after the event. Letters and permission slips will be sent home next week, forms and money are to please be returned to Ms G Baker (glass office in the library) or our AYP Officer Mr C Butland (Male PE office). 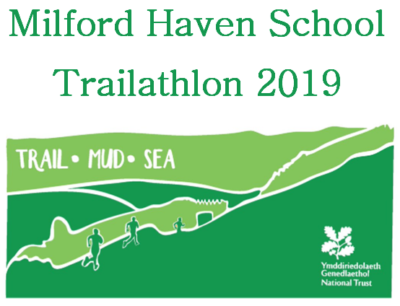 ONE WEEK TODAY! Our annual Macmillan Coffee Morning will take place on Friday September 27th. During morning break judges will award prizes for our whole school bake off competition, and then the general public are invited to join us between 12 and 1pm to enjoy tea and cake all in aid of a very worthy cause.

Our Year 8 and Year 9 rugby teams travelled down to play Greenhill school on 19th September.

The Year 9 pupils performed brilliantly, playing two 10 a side matches in a round robin type format. The boys scored some lovely tries and never gave up.
MOM’s were Janis Leja and Sam Simms.

Our Year 8 team played some very nice rugby, looking to use the ball and spread it wide whenever they had the chance. They ran out comfortable winners in the end and fully deserved their victory. A big shout out to the girls for playing their first game in the boys team.
MOM’s were Harry Picton and Lennon Howlett. 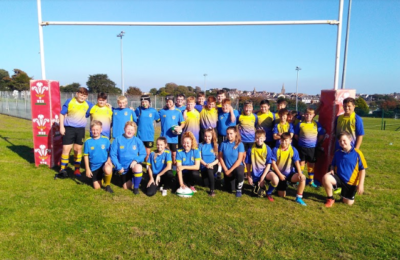 Last week we were privileged to welcome back to Milford School Prof. Julian Davies. Prof. Davies left Milford in 1955 to study Chemistry in Nottingham and went on to become an internationally acclaimed microbiologist; best known for his work on the biology of small molecules and antibiotics. Prof. Davies’ studies are wide-ranging and he has made fundamental discoveries relating to antibiotics and antibiotic resistance. For example, he uncovered the origin and evolution of antibiotic resistance genes — an important step in our ability to treat infectious diseases.

He identified that resistance genes, originally the response of bacteria to their exposure to small — sometimes damaging — bioactive molecules in the environment, are spread by ‘horizontal’ gene transfer between species and even genera. Consequently, his work has been central to the development of drugs to overcome antibiotic resistance.

Prof. Davies’ research output has resulted in hundreds of publications in scientific journals, six books and numerous guest lectures. He has received many awards, including the American Society for Microbiology (ASM) and Society for General Microbiology Gold Medals, and the Bristol–Myers Squibb Award. He is former President of the ASM, a Fellow of the Royal Society of Canada and a Foreign Member of the US National Academy of Sciences.

Prof. Davies has very kindly sponsored a Science Prize in Milford Haven School for a number of years, and is keen to work in raising pupil aspirations and achievements in Science as he is very grateful for his good start at Milford Haven Grammar School. Prof. Davies came to school to have a tour to see how we are looking to develop the new Curriculum for Wales, and to have a walk down memory lane to see the changes in education and is keen to keep close ties with the school. 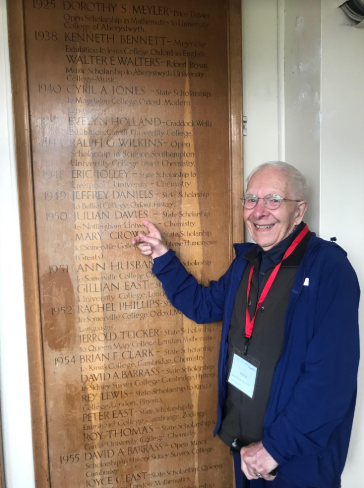 The After School Youth Club @ MHS

Who – Open to every MHS pupil

Youth Club will run every Tuesday and is very much led by the young people who attend the club. They will choose the activities, projects and direction of the club via committee meetings held every Friday after Lesson 5. Any pupil who is interested in becoming a committee member should please speak to Jimmy (School Based Youth Worker).

All pupils are welcome to have a chat with Jimmy in the Youth Room for more information.